All About Dachshund Dog

All About Dachshund Dogs

Nicknamed as Weiner dog, hot dog, or sausage dog, dachshund dogs are an increasingly popular breed of because of its unique physiology.

Every time you see any dog with a long body and tiny legs, you know it is a dachshund. Due to its appearance, it goes by many names – Doxie, hot dog, sausage dog, teckels, and wiener dog.

Dachshunds were used to track the scent of burrowing animals such as badgers, foxes, and rabbits.

However, people now use them as small-game hunters, show dogs, and family pets.

If you have a dachshund dog or plan on adopting one in the future, learning about this breed will be helpful.

The most discernable appearance of dachshund dogs is its elongated body but short and squat legs.

Also, ironically, the Dachshund is one of the most widely mispronounced dog breed names - daschund, daschunds, etc.

The mighty Dachshund. Note the low ground chest clearance with the ground.

The reason why everyone can recognize a dachshund is that of its long and low body.

This breed has three types of coats – longhaired, smooth, and wirehaired.

The color of its coat can range from a combination of hues such as black, tan, cream, blue, chocolate, fawn, red, wheaten, and wild boar. Sable, dapple, and brindle are standard markings on the dachshund dog.

This canine has a pointed and long muzzle, floppy ears, and eyes in the shape of almonds.

As hunters used this breed to against tunneling animals, it has a prominent chest. It has strong hind legs with a tail extending straight out of the body.

Intelligent, energetic, and stubborn are three words you will use to describe the dachshund temperament. At home, they love to interact and play its owner, forming a deep attachment.

If you have other family members at home, especially children, you must socialize the canine.

With the right upbringing, you can make sure your dachshund behaves properly at home and in social settings.

When threatened by other dogs, the dachshund will try to establish its dominance, despite its size.

Due to this reason, if you have other pets, you should introduce them to this breed at an early age.

Another important characteristic in the dachshund temperament is its bark. Even though this is a small dog, it has a deep and loud bark, making it an excellent watchdog.

If you are adopting or buying a dachshund puppy, meeting one of its parents will give you an idea of its temperament.

As these dogs are extremely social, you can’t keep them outdoors in a kennel. They love to be with their owners, which is why they should stay indoors.

As the dachshund temperament leans towards stubbornness, you may find it challenging to train this breed.

Avoid being harsh or punishing this canine, as it doesn’t react well to these types of schooling.

A better way to account for the dachshund temperament and get excellent results from training is through rewards and positive reinforcement.

However, if you plan on using treats for the reward-based training, make sure you don’t go overboard.

Despite the size of this breed, they have ample amounts of energy and stamina. They require regular exercise, as it helps them build the right muscles to support their back.

Due to this need, you need to take this dog on a walk at least twice a day.

However, make sure you don’t allow it to perform the following activities, as it increases the risk of injuring its back:

· Climb up or down the stairs

· Jump on or off your furniture

Due to the body structure of this breed, you have to make sure this canine doesn’t become overweight.

An increase in weight can stress out your dog’s back, affecting its quality of life significantly.

The amount of food it should eat depends on its activity level, build, age, metabolism, and size.

However, if you want to ensure the dachshund life span is long and healthy, feeding it high-quality food is crucial.

The level of grooming for the dachshund dog depends on the type of its coat.

Generally, they are easy to maintain, as they have minimal to no dog odor and shed moderately. Every month, you must trim its nails.

To prevent bacteria and tartar formation in the mouth, you should brush its teeth at least twice a week, if not every day.

If the canine belongs to the smooth coat variant, you can use a damp cloth to keep it clean.

For wirehaired dachshunds, you need to brush them at least once or twice a week.

However, if you want the coat to look its best, you have to get it hand-stripped by a professional pet groomer.

Also, you have the trim the eyebrows and beard when it gets too long. 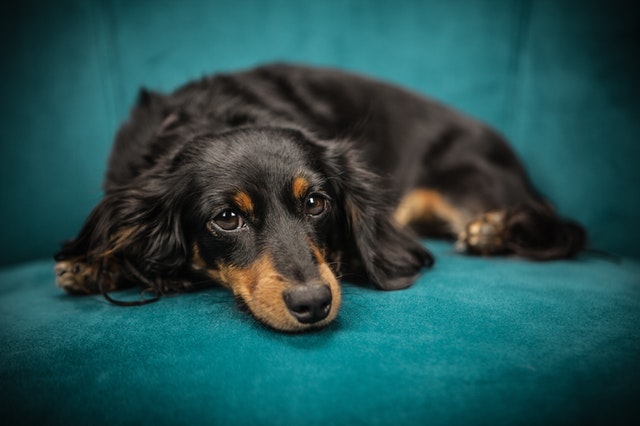 To prevent the formation of mats, you need to brush longhaired dachshunds regularly.

How frequent you need to groom the canine, depends on the thickness of its coat.

You must clean the ears of the dachshund dog every week, as it can suffer from an infection.

Dachshund means badger dog in German. The roots of this breed go back to the 15th and 16th centuries.

During this period, hunters used these packs of these canines to hunt burrowing animals and wild boars.

Over centuries, hunters bred this dog to be fearless and courageous, when hunting its prey.

Through selective breeding, wire coat dachshunds were born, to help them hunt in thorny flora.

Similarly, those with long coats were preferred in colder climates.

For several decades, the dachshund dog has been Germany’s national symbol.

When you provide a healthy diet and sufficient exercise to this breed, the dachshund life expectancy is between 12 – 16 years.

As it is vulnerable to intervertebral disc disease, it is common for this canine to suffer from back problems.

When it suffers from a head injury or due to the dog’s genetics, it can have epileptic seizures. Also, they are prone to:

While these health problems may not affect every canine in this breed, it is essential to know about them, so that your dog can receive appropriate medical care.

How Dogs Find Their Way Home

How Dogs Find Their Way Home

22 Greek Dog Names that Elaborate on Your Dog’s Personality

22 Greek Dog Names that Elaborate on Your Dog’s Personality

13 reasons why dogs are better than cats

13 reasons why dogs are better than cats