Do you remember your first encounter with a dog? That instance when you feel the softness of his fur, the gentleness of his nose bumps, and how sticky his licks were (EXPERIENCE VARY!)

Sometimes, all you need, after a bad day at work or school, is just a nice warm hug from your loyal dog(s).

If you've never tried, do it. You'll not regret the power of a dog's love.

Dog Affection: Why Do Dogs Love Their Owners?

Dogs and humans have lived together for centuries. Many people believe that humans and dogs first started cohabitating around 14,000 years ago.

Some researchers suggest that this link could go as far back as 40,000 years.

Today, people all over the world love their pet dogs and consider them to be an important part of their family.

Have you ever wondered if your dog loves you back too? Dog affection is easily experienced by any owner who loves their pet dog.

Dogs wag their tail when they see you, some of them may even jump up towards you to greet you.

Some dogs love to lick their owners, others love to lie down next to them and sleep. But where did this relationship develop from?

Humans and dogs have lived together for thousands of years.

But how this relationship truly started is still a mystery. Over the years people have come up with various theories.

The most predominant among these is that dogs might have originally approached humans in an effort to scavenge off them.

As humans evolved, they turned to agricultural settlers instead of hunter gatherers.

Once they had settled, this indicated that they had a surplus of food. The early dogs might have approached humans to ask for food.

By this time, genetic differences would have developed between them and their ancestors, the wolves.

But why would humans gladly accept dogs into their settlements? The simplest answer is because they offered better protection against wild animals.

They could detect whether danger was approaching and warn their owners.

Dogs also made great companions for hunting, and over time, people's love for dogs only grew. Science offers a slightly different explanation.

Dogs and their Genetic Predisposition to Hypersociability

Dr. Clive Wynne, a psychologist from Arizona State University, conducted a research with Dr. Bridgett vonHoldt from Princeton University on dogs and social behavior as seen through their genes.

They found that identified genes in dogs that are related to the Williams-Beuer syndrome.

Williams-Beuer syndrome is a rare condition some humans experience, and one of its main symptoms is increased friendliness.

This discovery led to the possibility that dogs are genetically predisposed to hypersociability.

And dogs generally do behave in very social ways with the people in their lives. In another study, together with Dr. Udell, they found that this gene is absent in wolves.

The present of the gene related to Williams-Baeur syndrome could be the main reason why dogs are friendlier to humans than wolves are.

This genetic variation could also be the reason behind why early humans and dogs bonded together so well.

Dog affection is visible to all dog owners and dog lovers.

From stories to videos to images, people have found millions of expressions of dog affection over the years.

But why dogs specifically? Humans domesticated various animals as they developed their agricultural settlements.

Cows were domesticated for their milk, chicken became a source of protein through eggs, and sheep provide wool as well as meat.

Dogs are unique in that they form a symbiotic relationship based on love with their owners.

The owners don't absolutely need the dog, and could perform fine without it.

The dog also does not actively contribute to human consumption in any way, but takes what's left after humans have finished eating.

He found that dogs were much better at following human directions in comparison to wolves.

This natural ability to understand and react to humans may have given dogs an advantage over other species in the animal kingdom.

Dr. Wynne believes that socialization could be a major factor behind why dogs are friendly to humans. He did research on dogs and socialization.

He found that puppies that interact with humans even ninety minutes a day for a week, until they are fourteen weeks old, are socialized.

Dogs and How They Experience Love

Dogs are some of the most loyal and loving pets humans have ever had the pleasure of cohabitating with.

But it's not just humans that dog affection extends to. Many books for dog lovers talk about how dogs love their owners, but dogs also love other species as well.

Dogs have the unusual ability to love and care for whatever species they socialize with early in life.

In his book on dogs showing love, A New Understanding of Canine Origin, Behavior and Evolution, Ray Hammond shows that dogs can learn to love sheep.

Similarly, dogs can learn to love many other animals as well. Some families have different kinds of pets - cats and dogs also live together in some homes.

If the dog grows up socializing with a certain animal, he will be friendly towards it later on.

At the same time, wild dogs who do not grow up socializing with anyone are aggressive even towards humans.

Early life socialization plays an important role in how the dogs personality and behavior will turn out.

In his book for dog lovers, Dog is Love: Why and How Your Dog Loves You, Dr. Clive Wynne talks about the emotional and social intelligence that are unique to dogs.

He says that they are capable of interspecies love, and this love is not limited to humans.

But it is with humans that dogs share most of their love.

As pets, affectionate dogs are common. Science takes a look at whether dogs experience real love for humans, or whether their behavior is solely symbiotic.

The Biology of Dog Affection

Many dog lovers have tried to discover whether dogs showing love to humans was truly love or not. Gregory Burns is a neuroeconomist from Emory University.

He used magnetic resonance imaging (MRI) to see how a dog's brain reacted to humans.

He discovered that when the dog interacts with its owner, a part of his brain lights up.

This part is similar to the same area in humans that light up when we talk to someone we like or love.

In his book for dog lovers, How Dogs Love Us, Berns goes into detail on how sociability in dogs is linked to affection.

Other research conducted by Berns has also shown that on occasions, dogs will even prefer interacting with their human owners to food.

In the study, he exposed dogs to smells of their owner and other familiar dogs, as well as strangers and unfamiliar dogs. He used functional magnetic resonance imaging to record his findings.

What he found was that only when the dog smelled their owners, did the caudale nucleus light up. This part of the brain is associated with their reward center.

Japanese researchers discovered that oxytocin was released both in humans and dogs when they stared into each others' eyes lovely lovingly.

Oxytocin is also known as the love hormone.

If this hormone is being released both in the owner and the dog, then it shows mutual love and affection between both.

Dogs are gregarious and love people, this is a part of life we are accustomed to.

Scientific evidence on what made dogs evolve as an affectionate pet keeps growing.

But for now, the proof seems to point to the fact that dogs love their owners, and enjoy being affectionate with them.

But there is a note of caution that I must add: There is actually an IMPROPER way of giving affection!

What I mean by improper is that your dog might mistake your love and touches as a form of weakness or subservience to your dog.

One must understand that touch is something quite big for a dog. In the wild, dogs use touch as a display of both affection and dominance.

So every time you experience dog affection, they ether really love you, or are asserting dominance over you.

That's why sometimes, depending on body language, your dog will put his paw on you as a sign of him dominating you.

In short, dogs are not the little 'humans' we think they are. Their thought processes are VASTLY DIFFERENT from us humans!

Dogs are animals that is based mostly on instinct - to survive and reproduce - and that they rely on the owners as the leader of their pack. Which is why being the pack leader is so important!

If they sense that you're not 'strong' enough to lead them, they might just take charge (which leads back to the dominant dog paws on you)

Of course, you have to do your research. There are dogs that belong in the 'gentle dog breeds' category - meaning these dogs love affection. These explains why dogs cuddle as well.

So what happens when they're 'in charge'? They'll boss you around. When you take their food bowl away, they snarl and snap at you. You get the picture.

All because you *MIGHT* have given affection in situations that doesn't warrant it, in perhaps a different state of mind/energy level, over the course of weeks.

A few pointers for you to note will be first to observe yourself: How do you behave when your dog say, eats?

If he shows his teeth when you're taking away his food bowl, what do you do? Shout? Pat his head? These are obviously big no-nos to do.

What are you rewarding your dog for? If he comes up to you, whining for treats, do you oblige and give him because of that pouty, puppy-dog eyes?

Yeah, we get it, those eyes are too cute to resist. I know, I've given in before to those eyes oops. However, in giving in (too often at least), you become his servant, and he becomes your owner. You get the idea. 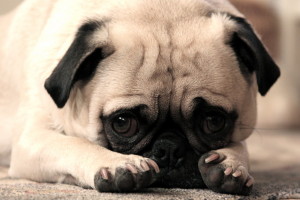 So anyway, allow me to share some tips for you when you're going to give affection to your dog(s):-

Sometimes, dog love and dog affection isn't so straightforward for us. But armed with these simple tips, it'll make it much easier to love your dog!

However, if you're still having a little bit of trouble with your dogs, you could have a look at lessons and other help here.

What To Do If Your Dog A Fever

How to train a Dachshund