Heartworms in dogs is a very serious and fatal disease. The culprits are foot-long worms that live in the lungs, heart, and associated blood vessels of the dog.

If left untreated, it will cause heart failure, lung disease, and damage to other organs in the body.

The disease not only affects but other mammals too such as ferrets, cats, coyotes, foxes, wolves, sea lions, and in rare cases- humans too.

Since coyotes and foxes are found in close proximity to urban areas, they are the main carriers of heartworms.

Although heartworms in dogs are common, cats may develop this condition too.

Heartworms cause the most damage-causing parasites in a dog’s body, but luckily it’s nearly 100 percent preventable.

In other words, heartworms in canines are easy to prevent but expensive to cure.

The disease is transmitted by infected mosquitoes. Heartworm larvae are deposited into the dog’s bloodstream by a feeding mosquito.

Eventually, the larvae migrate into the heart’s chambers or into the blood vessels of the lungs.

Once the larvae establish themselves or mature in the heart, the worms begin to alter the blood flow to the entire body.

Adult heartworms can grow to measure nearly a foot in length.

Heartworms in dogs affect several organs including the lungs, heart, liver, and kidneys. As a result, the dog may exhibit a variety of symptoms.

The most common signs are lung and heart disease. You might suspect heartworms in your dog if he or she tires easily, has shortness of breath, and coughing.

During the early stages of the disease, your pet dog might be asymptomatic.

Signs of heartworm frequently progress over several weeks and even months.

However, if the condition is left untreated, heartworms in dogs is fatal.

How is heartworm transmitted between dogs/pets?

They produce minute microfilaria or baby worms that travel through the bloodstream.

When the mosquito bites the infected animal and takes its blood, it will pick up some of these baby worms. These will mature and develop into infective larvae over a two week period.

If the infected mosquito bites your dog or pet, the infective larvae land on the animal’s skin. They will enter their new host’s body via the mosquito’s bite.

Once the larvae are inside your dog, they will develop for a further 6 months before maturing into adult heartworms.

Heartworms in dogs can live inside your pet’s body for up to 7 years.

In cats they take hold for nearly 3 years. Due to the longevity of heartworms, a new mosquito season can quickly increase the number of worms in your infected dog.

At any given time, a dog may host up to 250 heartworms in its body.

Can humans get heartworms from dogs? The answer is NO.

Heartworms spread via mosquito bites only. Can humans get heartworms? YES. Just not from dogs. 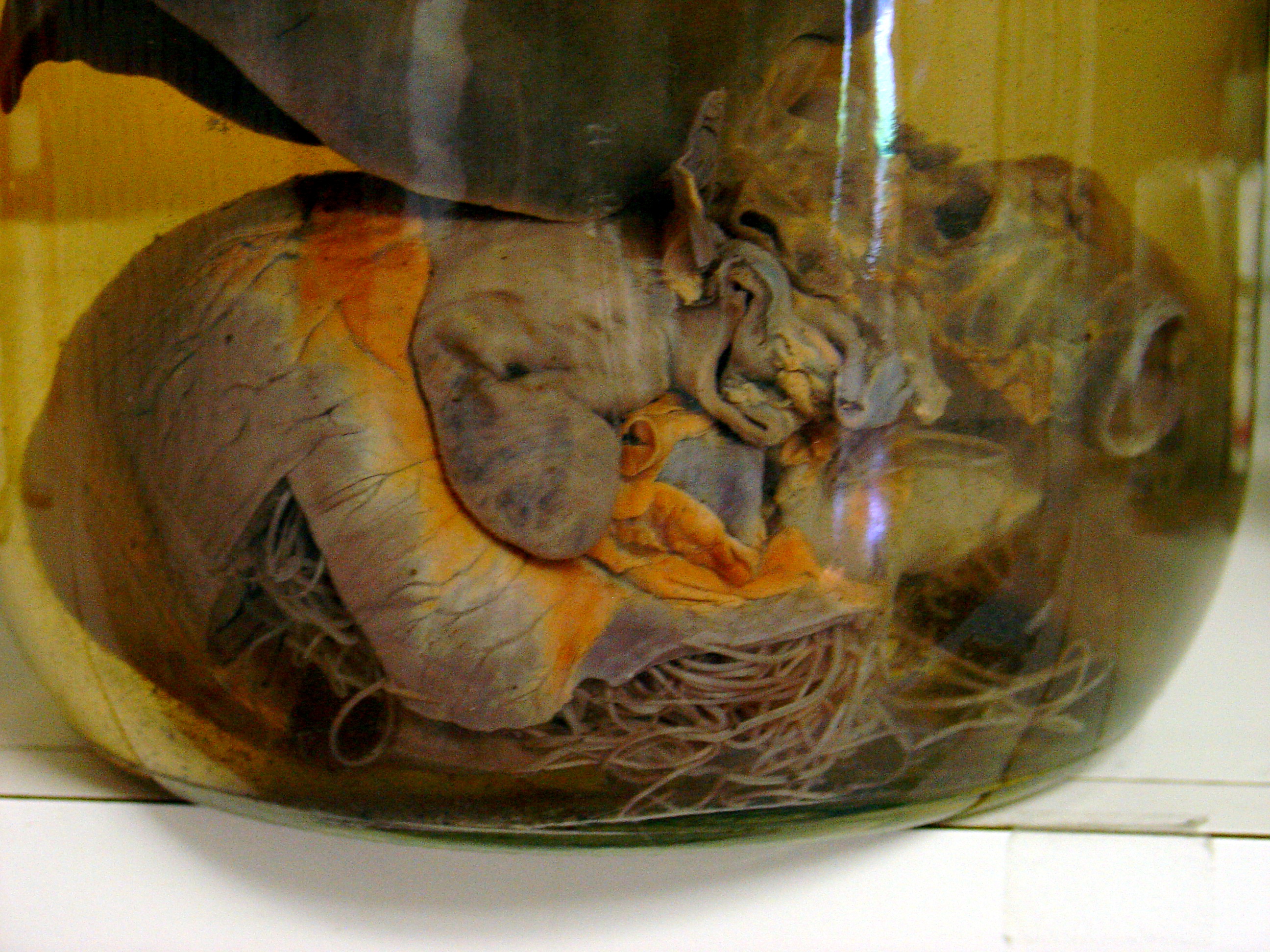 Symptoms of Heartworms in Dogs

The types of symptoms exhibited by your dog depends on the heartworm’s life cycle. However, these may also be signs of another condition.

For instance, weight loss, loss of appetite, and fatigue- these are signs of a general problem in your pet, or something worse-heartworm.

The tricky aspect of heartworms is that your dog might be infected but is asymptomatic.

He or she may remain this way for a long time before any worrying symptoms develop.

By the time you notice heartworm symptoms appears, it indicates the disease has spread significantly.

Any heartworm signs that do appear show up when the worms have reached maturity.

This happens after the 6-month, post-infection period. Early detection is the best defense against this disease.

Here are early-stage symptoms of heartworms in dogs:

If your dog suddenly prefers to stay inactive or loses interest in walks, then it might have the disease. As the condition takes grip, any type of physical exercise such as playing fetch or running after a ball may feel too strenuous for your dog.

Compared to a kennel or regular cough that is sporadic and strong, heartworm cough sounds persistent and dry. During early onset, a small amount of exercise may induce coughing spells. As the parasites travel through the lungs, they will create a severe blockage and painful discomfort.

As the heartworm disease progresses and becomes severe, it becomes harder for your dog to amass enough energy for simple tasks. Routine behaviors like walking and eating will feel very taxing and lead to extensive weight loss.

Middle-stage symptoms of heartworms in dogs:

When the heartworms mature, they begin to live in the veins and lungs of the host, leading to a severe blockage and causing many symptoms like,

Your dog will begin to mimic breathing problems that are similar to an asthma attack. Fluid will accumulate in the blood vessels of the lungs, making it hard to oxygenate blood.

Bulging ribs are caused by the fluid build up in the lungs. As a result, your pup’s chest may stick out. The weight loss will also cause the bulging of the ribs. Sometimes the parasite’s presence also causes fluid accumulation.

Once the worms are full grown in the dog’s lungs and heart, your pup will begin to show clear symptoms of heartworms in dogs. These are accompanied with long term effects on your dog’s health.

In this stage, these symptoms will become more pronounced with additional complications. Some signs that may emerge include:

Dogs with a large cluster of heartworms will develop sudden blockages in their blood flow within the heart.

This may cause a life-threatening condition called caval syndrome.

Also called cardiovascular collapse, it presents signs of onset such as pale gums, dark, bloody or coffee-colored urine, and labored breathing. Without immediate surgical removal of the blockage, only a handful of dogs will survive. 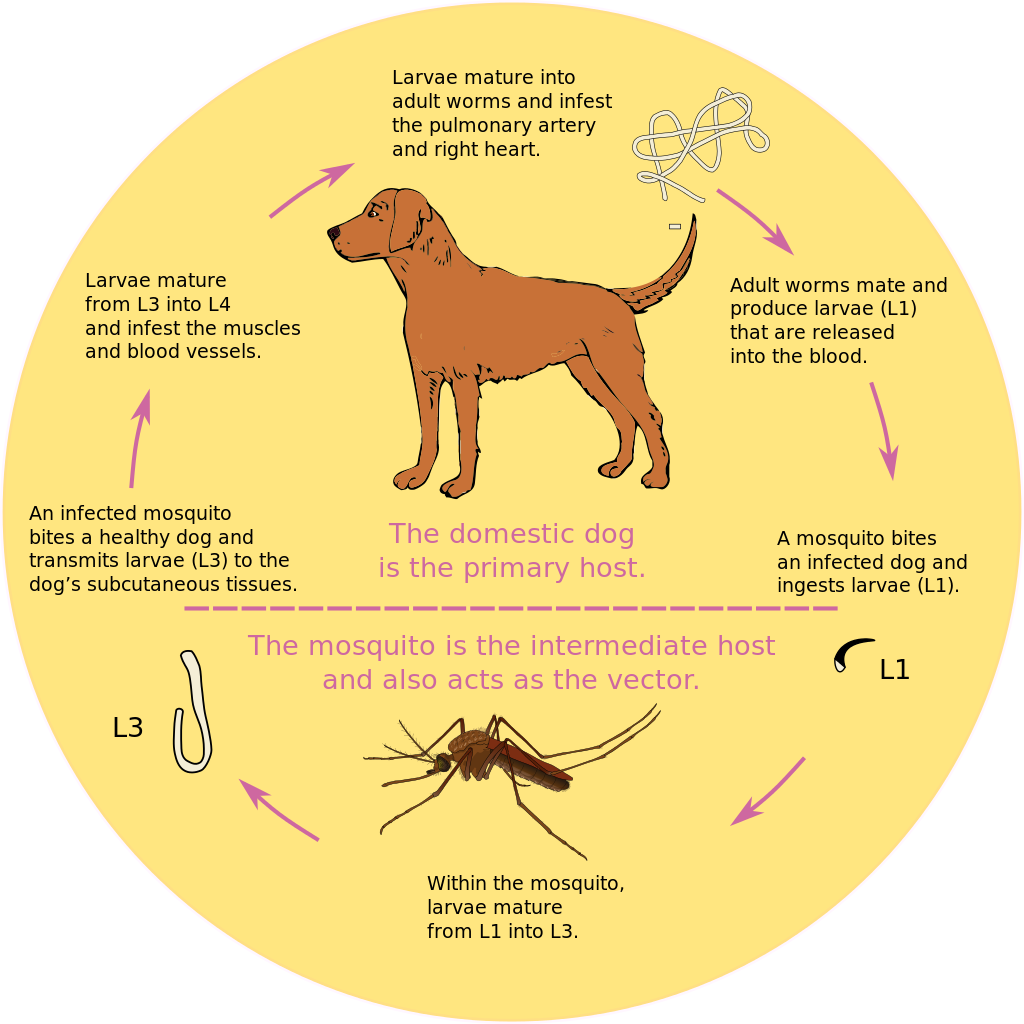 Treatment: What to do if my dog has heartworms?

So here's the million dollar question: How to get rid of heartworms for dogs?

The first step in recovery from heartworms in dogs is identifying the problem.

Once the disease is spotted, the next step is to kill the immature and adult worms while minimizing side effects of the actual treatment.

Heartworm treatment for dogs can be a difficult, painful, and long process for your dog.

At the end of the treatment, there is no sure guarantee that your pet will be completely cured of heartworm disease.

This is why prevention is the best medicine.

If your veterinarian suspects heartworm disease, he or she may prescribe a series of blood tests to confirm this condition.

An antigen test might be administered to identify heartworm proteins.

These are released by adult female heartworms into your pet’s bloodstream.

In a majority of cases, antigen tests are effective at detecting heartworm infections.

The earliest heartworm detection in your pet’s bloodstream is possible five months AFTER being bitten by an infected mosquito.

Another test is used to identify microfilariae in the pup’s bloodstream. A microfilariae test will show that the dog is inhabited by adult heartworms.

Keep in mind, only adult heartworms are able to mate and produce small worms. It is only at the five to six-month mark that the presence of microfilariae can be identified.

Once the disease is confirmed, heartworm treatment for dogs can start.

In the past, the medicines used to treat heartworm disease contained excess levels of arsenic.

This indicates that the worms have been present in the dog’s body long enough to cause serious damage to the kidneys, liver, lungs, heart, and blood vessels.

In rare cases, the disease is advanced that it might be safer to treat the dog for organ damage than risking the negative side effects of the medicine used to kill the heartworms.

A dog in this condition will live for a few weeks, so keeping them comfortable is key.

To kill the adult worms, injectable drugs might be used. Drugs containing melarsomine will kill the adult heartworms in the heart, including the adjacent vessels.

Melarsomine is administered with a set of injections. Your veterinarian will decide the specific injection and schedule them according to your pet’s condition.

Heartworm treatment for dogs begins with the first injection. This is followed by a thirty day rest period. Two additional injections are administered- both 24 hours apart.

Your dog will also receive doxycycline, an antibiotic that combats infections caused by the Wolbachia bacteria that live in heartworms. After the treatment, complete rest is vital.

Adult heartworms start to die within a few days and decompose.

As the heartworms break apart, they are transported towards the lungs where they will attach themselves to the blood vessels.

Eventually, the decomposed worms are reabsorbed into the body. Resorptions may take a few weeks to months.

The majority of post-treatment complications arise from the dead heartworm fragments.

This will be a critical period for your dog which is why it’s essential to keep it quiet and comfortable.

Your dog will not be allowed to exercise after a month after receiving the final injection treatment for heartworms.

The first week of treatment post injections is vital because this is the time when the worms are dying.

A cough becomes noticeable for up to eight weeks after receiving treatment in most severely infected dogs.

If the coughing becomes severe, let your veterinarian know immediately. You will be notified of additional treatment options.

If your dog has a noticeable reaction in the time after the initial treatment, it needs immediate medical attention.

However such reactions are very rare.

In such cases, treatment with antibiotics, supportive care, intravenous fluids, and anti-inflammatories will be recommended.

In addition to killing the adult heartworms in dogs, medications to kill the larvae will also be given.

In order to kill the heartworm larvae, your dog may require hospitalization.

Observation will be required once the medication is administered.

This may be necessary either after or before the adult heartworm injections are given. After the heartworms are treated, your canine will be put on a heartworm prevention program.

Your dog’s veterinarian will choose the right heartworm medication based on its condition.

Are there additional treatments for heartworms in dogs required?

If your dog had a severe form of heartworm disease, it may need to be on a special diet, including diuretics to get rid of excess fluid accumulation in its lungs.

Additional drugs may be necessary to improve your dog’s heart function. This will be started before the heartworm treatment begins.

In some cases, even after the worms are killed off, your dog may need a lifetime heart failure treatment.

To prevent heartworm disease, your dog should be routinely tested for heartworms.

The frequency and timing of the tests depend on the following variables:

The dog’s age when the prevention is being started-

Whether you forgot to give heartworm prevention and for the duration-

The duration of the heartworm season where you live.

Dogs aged 7 months old or older should be routinely tested for heartworms prior to beginning heartworm prevention.

If a heartworm-positive canine isn’t tested prior to starting the preventative, the dog will stay infected with the heartworms.

Annual testing for pups on heartworm prevention is highly recommended. Heartworms in dogs is a serious condition that can be effectively treated with the right drugs.

How to Avoid Puppy Accidents

How to Avoid Puppy Accidents

How to housebreak your dog

How to housebreak your dog