Why do dogs put their tail between their legs

It is the greatest joy of every dog owner to see their dog coming towards them with their tails actively wagging.

Why? Because we all know that an actively wagging dog’s tail shows its happiness and excitement.

Dogs use their tails to communicate their feelings with us. There's a lot a tucked tail, canine body language, and tail behavior can tell you about your dog.

To answer the question directly, a dog usually puts his tail between his legs and acts weird when he is scared or intimidated by the circumstances.

This is one of the most fundamental reasons behind this particular action, but there are many more reasons that we will discuss below.

However, if your dog has his tail between his legs, acting weird, shaking, or whimpering, you should talk to your vet.

When Do Dogs Place Their Tail Between Their Legs?

A dog’s abdomen and genitalia are their most sensitive areas, and they feel the need to protect themselves when feeling threatened. That is why they keep their tail tucked in that area to keep it safe from potential danger.

A dog's tail tucked in between his legs usually indicates that he is afraid. But this is not the only scenario where this happens. Another thing to note is that not all dog breeds showcase tail tucking.

Some, like terrier breeds or Chow, do not tuck their tails between their legs. Also, many dogs do not have long tails (take the French Bulldog, for instance) that they can tuck in.

Circumstances that make dogs sad, like their owners being upset or leaving the house, also count. Dogs show sadness and share in your sorrow by placing their tail between their legs. They may also try to cheer you up with a soft or active wag of their tail.

Ashamed of Their Behavior

Alternately, when they have done something wrong and are ashamed of their behavior, they respond by putting their tail between their legs.

Thus, if you see a dog with a tail between his legs acting weird, you can be sure they have either peed in the house, chewed up a shoe, or destroyed something.

Dogs also respond in this way when they are scolded by their owners. Since they share a pure love for their owners, it breaks their hearts to see them angry or upset with them.

Hence, they may feel scared or sad and put their tail between their legs. 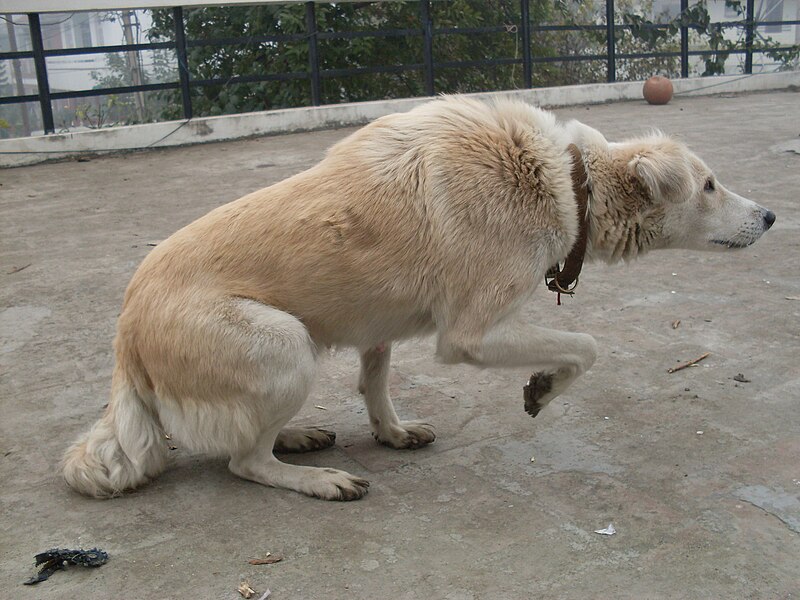 Fear of Other Dogs

From a dog's tail carriage or tail position, one can ascertain who the pack leader is. This is because in the presence of the pack leader, other dogs will put their tail between their legs.

When dogs are afraid of someone or something, this is how they show their fear. This may also be the case when they are unsure of the circumstances and confused about whether to assume an alpha or a beta role.

They place their tails between their legs to show fear.

In the presence of other dogs, if your dog starts behaving this way, it may mean that he is showing submission. It may also be a way for them to stop the other canines from sniffing their genital area, thereby preventing mating attempts.

Dogs that have gone through some trauma may often place their tail between their legs. This is because whatever they went through was so traumatic that it left them permanently scared and submissive.

Dogs that come from rescue homes also behave like this as they may also have been beaten or traumatized previously.

What to Do in this Situation

As is evident from the above points, dogs only behave this way when they are unsure of themselves or are afraid. Thus, the best thing you can do as pet parents is to reassure them that everything is fine.

From the dog’s tail position, dog owners can understand whether their canine friends are happy, sad, angry, or agitated.

It is generally understood that dogs put their tail between their legs when they are scared, and that is where the popular idiom (tail between one’s legs) also comes from.

But, as we have seen above, there may be multiple reasons why a dog may do this action.

A dog tucking its tail does not directly indicate them being scared; instead, it may be triggered by an unfamiliar environment, dog sniffing, bad behavior, or even sadness.

If you feel that your dog's tail position is constantly between their hind legs or notice any other warning signs, seek professional veterinary advice.

Since dogs cannot communicate their needs with words, we need to read their body language to figure out how we can help them.

Understanding these actions will help you understand your canine buddy’s feelings better and help them cope with their circumstances.

Trust us! They will thank you later with lots of sloppy kisses if you protect them from whatever seems to be threatening them. Check out the FAQ section below - we know that you might have some lingering questions or doubts.

Why Does My Dog Put His Tail Between His Legs While Eating?

This usually happens when dogs are hungry and want to eat, but at the same time, they feel that they must be vigilant of their surroundings. Tucking their tail in when eating is a sign of protective behavior.

They do this when they are eating in a new or unfamiliar place. The presence of unfamiliar people may also trigger this response.

Do Dogs Put Their Tail between Legs Due to Constipation?

Not always. You should not assume that your dog is putting his tail between his legs to ease constipation. Signs like excessive straining while pooping, scooching or intermittent squatting point toward constipation.

Table of Contents
When Do Dogs Place Their Tail Between Their Legs?
To Show Sadness
Ashamed of Their Behavior
On Being Scolded
Fear of Other Dogs
To Protect Themselves
Trauma
What to Do in this Situation
Conclusion
FAQs
Why Does My Dog Put His Tail Between His Legs While Eating?
Do Dogs Put Their Tail between Legs Due to Constipation?

8 Reasons Why Dogs Put Their Ears Back

8 Reasons Why Dogs Put Their Ears Back